Every year around the globe, 1.25 million people are killed in traffic – about the population of a city like Munich, Stockholm or Dallas. Up to 50 million are seriously injured. Road crashes kill more people than malaria or tuberculosis and are steadily working their way up the top ten causes of death worldwide, forecast to rise from currently ninth place to fifth by 2030. Among the 15 to 29-year olds, they are already the most common cause of death. The human tragedies behind these stark figures are as dramatic as the economic impacts: Road fatalities and serious injuries cost many countries an estimated 2 to 5% of their GDP.

Clearly, this situation is unsustainable. The United Nations’ “Decade of Action for Road Safety”, launched in 2011 with the aim of stabilising the number of road fatalities and then beginning to bring them down by 2020, was an important step to acknowledge that action is required at a global level to stop the daily carnage on the world’s roads. Then, last year, the UN upped the ante by including an even more ambitious road safety target in the Sustainable Development Goals (SDGs): Goal 3.6 calls on the international community to halve the number of road deaths and injuries by 2020. 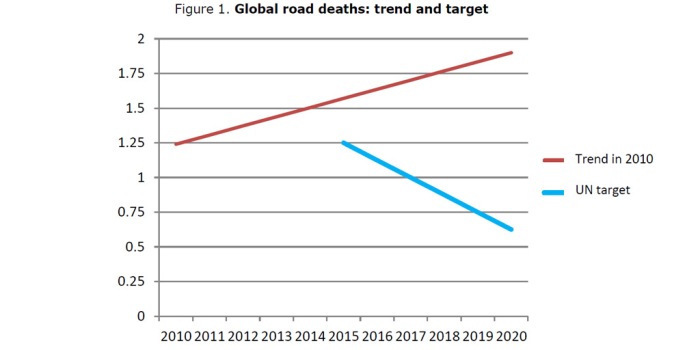 But in order to meet this target, more than 400 road deaths would have to be prevented every single day for the next four years; not to even speak of injuries. Yet with the number of cars growing rapidly in many emerging economies, so is the death toll there: Powerful, vehicles on inadequate roads, drivers with little training, inadequate rules and weak enforcement form a deadly mix that is not going to disappear easily.

A reboot for road safety policies

In developed economies, meanwhile, the downward trend that marked the past three decades (and saw the death toll in the UK, for instance, fall in 2015 to almost 20% of the 1966 peak) seems to be coming to an end: Fatality rates in many of the best-performing countries are levelling out and in some cases rising again, notably among vulnerable road users such as pedestrians, cyclists or seniors. A reboot for road safety policy is thus urgently needed, as the approaches that brought success in the past do no longer deliver the returns they once did, or are overwhelmed by an avalanche of cars.

Inspiration comes from a group of countries that have broken with the traditional paradigm in road safety, which is to fix crash hotspots and try to make road users behave more responsibly with a lot of stick and a few carrots. Nations like Sweden or the Netherlands, but also metropolises like New York City, have made it their official policy to try to eradicate road deaths. This approach, known as “Vision Zero”, starts from the premise that the loss of human life as the price for mobility is unacceptable – and that the mobility system should function in a way that poses as little deadly risk as possible.

This approach has been followed for decades in areas like occupational safety, where machinery has long been designed in a “forgiving” way, so that if the operator makes a mistake it will not kill or maim him – think of a circular saw that stops automatically if a limb gets too close for comfort. This “Safe System” approach is not new to transport either – aviation and rail operations would be unthinkable without it, as we would not want a single person’s mistake make a plane crash or trains collide.

Road traffic has yet to embrace the Safe System. Media stories regularly remind us that “human error” was the involved in this or that horror crash. Subtext: While all systems functioned, unfortunately the human didn’t, so there was nothing that could be done. Based on this view, governments spend billions on enforcement and the education of road users. But what is the price tag to get every single citizen to behave correctly all the time? Achieving 100% compliance is of course impossible. Humans make mistakes even if they are well-trained, willing to follow rules and capable of doing so. All of us who have turned our head while at the wheel to see what the kids are doing on the back seats know this to be true.

The Safe System approach that underpins “Vision Zero” accepts that humans will fail. From that principle, the challenge becomes to organise the traffic ecosystem in such a way that human mistakes do not cause serious harm. Here a second principle of the Safe System comes into play: The human body can only absorb a certain amount of kinetic energy before serious injuries occur. Again, a simple truth, too often disregarded. Taken seriously, it has wide implications for speed management, mixing traffic or designing infrastructure.

The third principle of the Safe System is shared responsibility. If the aim is to avoid serious harm, it’s just not good enough to blame the driver who hit a tree, or the elderly lady who stepped on the pedestrian crossing without looking. In a Safe System, the agency managing afforestation understands that its actions can have an impact on road safety, as does the urban planner who will foresee speed bumps that force cars to slow down at crosswalks.

The fourth and final guiding principles for traffic as a Safe System is as straightforward: You cannot address road safety piecemeal. All parts of the system need to interlock to reinforce each other, so that when one part fails in the chain of events leading to a serious incident, the others will still protect humans from injury or worse.

Technology will go a long way to make road traffic safer. Alco locks, automatic braking, intelligent speed assistance, electronic stability control and the like will make lethal errors less likely, no doubt. Self-driving cars, many hope, will solve the road safety problem by making error-prone human drivers superfluous. But autonomous driving is not a silver bullet. Forecasts put sales of self-driving vehicles at 11.8 million or about 2.7% of the global car fleet in 2035. And the vast majority will be sold in developed world, while fully 90% of road fatalities occur in low- and middle-income countries. The impact of self-driving cars on road safety will hardly be noticeable for another generation or more

There are other misconceptions about how Vision Zero works. It does not mean, for instance, that there will be no more crashes. There might even be more, because the Safe System is focused on avoiding serious injuries, not necessarily accidents. Take roundabouts: It is not rare that there are more collisions at roundabouts than at standard intersections. But because they rarely involve impacts at a 90-degree angle and occur at lower speeds, far fewer severe injuries result.

Ultimately, can there really ever be zero road deaths? On a global level, probably not. But looking at individual segments it is already happening: There are at least three European cities with more than 250 000 inhabitants that have not had a single road fatality in over a year, according to German safety specialist Dekra. In Sweden, not a single child was killed in a bicycle accident in 2008. On this level, zero road deaths as a target is not utopian – and then: if it can be done for one group or region or car make, it can probably also be done for others as well. If governments take the political lead and bring all those together who can and should make it happen, it can work.

Let’s give the Safe System a chance to save lives.

The International Transport Forum (ITF) at the OECD recently published “Zero Road Deaths and Serious Injuries: Leading a Paradigm Shift to a Safe System” (2016), which reviews the experiences of countries that have adopted Vision Zero and the Safe System and provides guidance for leaders who seek to drastically reduce road deaths in their communities. For this report and its global road safety work the ITF is today being awarded a Prince Michael of Kent International Road Safety Award.